Game Overview You are a Bouncinator Robot and you directive is simple; keep the party safe and swinging- but in this city it is no easy task. Using a combination of x-ray specs, scrutiny and flame thrower, you must assess the party goers quickly to make sure nobody is entering with restricted items. Oh and keep an eye open for people trying to sneak in behind you – some people will do anything to get to the party!

Controls The world is interacted with by using collisions and timed responses so that the player is free to play without the need of a controller. Most interactions are achieved with head movement. We have also uitilised the controls on the side of the Gear VR so that the player can turn their x-ray specs on and off with a simple tap. For a secret bonus we have added a space-bar function to change the randomised character generation and while not integral to the game play we found it fun!

Mechanics You must use the xray specs (and your own eyes) to look for weapons, drinks and other threats and then must decide whether to let the party guest enter, or give them the boot. Be careful! Get it wrong too often and not only will the party be a disaster, but you will be fired too! On top of this, you must keep an eye open for people trying to sneak in behind them. Looking in the direction of a guilty suspect will activate your weapon mode, allowing you to teach the sneak a lesson.

Innovation We strongly believe that the best VR games are created with the hardware fully in mind from the word go. For this reason we have designed an experience that does not relying on character motion, removing any risk of motion sickness. We have created a game that does not rely on any external controls allowing the player to become fully immersed. We also believe that that the “tap for x-ray” control is just the kind of thing that the gear VR was made for. This is designed to make the player feel even further immersed because the sensation of wearing a headset is justified within the game. Working with many characters and very low draw calls is always going to be a challenge, so we opted for a stylised game with randomly generated assets and facial sprites to create hundreds of mad combinations for our party guests.

What's next for us? With more time we would have liked to expand this game to multiple levels, taking the player to new mad landscapes. We had to strip back our idea for the time frame available but future iterations will include more crazy main characters, more randomisation and an upgradable robot body. 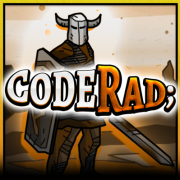 Comments for this submission are closed. View the software in Stoofnie's portfolio to continue the conversation.